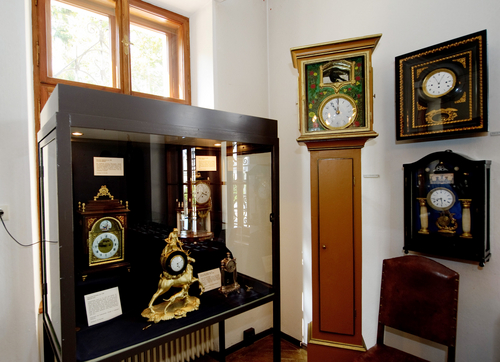 The Krahuletz Museum houses over 150 clocks from three centuries. The foundation of the collection was already laid by Johann Krahuletz. The bow spans from pocket sundials to baroque iron wall clocks to travel clocks of the 1970s, all pieces are fully functional thanks to the restoration by Prof. Ferdinand Stangler! The roar of the baroque bell tower is not for the faint-hearted …!

In addition to the historical clocks, the function principle of a movement is explained in the exhibition on the basis of models. The interplay of the individual components, weights, gear and pendulum can be presented very clearly. The picture on the right shows one of the collection’s oldest watches, a gothic iron clock from around 1550.

This clock was made by an unknown master from Austria around 1800, it has a polychrome carved wooden case with gilt pedestal. The symbolism of the eagle alludes to the French emperor Napoleon, who “brings the new time”.

Stutzuhr, so-called column clock, manufactured by the workshop Willenbacher and Rzebitschek in Prague, about 1820. It has a brass movement with an aisle and a pendulum with openwork disc. In the black polished wooden case, a glass case is embedded, in which small fabric flowers and a swan can be seen. Later, around 1850, a music box was installed in the base of the clock.

This website uses cookies to improve your experience while you navigate through the website. Out of these, the cookies that are categorized as necessary are stored on your browser as they are essential for the working of basic functionalities of the website. We also use third-party cookies that help us analyze and understand how you use this website. These cookies will be stored in your browser only with your consent. You also have the option to opt-out of these cookies. But opting out of some of these cookies may affect your browsing experience.
Necessary Always Enabled
Necessary cookies are absolutely essential for the website to function properly. This category only includes cookies that ensures basic functionalities and security features of the website. These cookies do not store any personal information.
Non-necessary
Any cookies that may not be particularly necessary for the website to function and is used specifically to collect user personal data via analytics, ads, other embedded contents are termed as non-necessary cookies. It is mandatory to procure user consent prior to running these cookies on your website.
SAVE & ACCEPT
Schriftgröße ändern
Kontrast umstellen
Accessibility by WAH
MENÜ