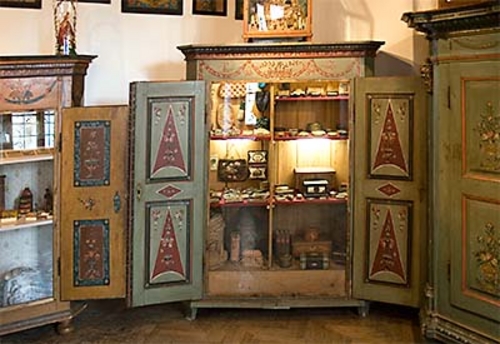 The basis of the folk art collection was laid by Johann Krahuletz. A significant increase in the stock was made by the 1934 acquired collection of Eggenburg notary Eugen Frischauf.

Both had set themselves the task of preserving the testimonies of the traditional peasant society and way of life that ended in their lifetime.

In addition to rural and civil furniture is a large variety of traditional items and everyday objects issued.

The Kunstkabinett is the treasure trove of the museum: here you will find a collection of selected paintings, sculptures and small objects from five centuries.

The Röschitzer Bauerstube was furnished in 1902 in this form. It served as a model for numerous local museums. As a life-sized diorama is the typical establishment of a living room of wealthy wine growers to see. The furniture and the wooden ceiling come from the wine village Röschitz.

In a special exhibition of the Krahuletz Museum in autumn 2015, the magnificent nativity scene from the former estate of the Eggenburg Redemptorist Monastery was presented to the public in new splendor: The work of baroque crib carvers from the Schönhengstgau (today the Czech Republic), today in the collection of the Niederöstereichischen Landesammlungen, was During the preparation of the exhibition extensive material technology was examined and extensively restored by restorers of the state collections.

The costumes worn by the ladies in Lower Austria on high festivals and holidays their gold bonnets, a magnificent headdress and once a valuable, well-kept treasure. The gold material used in the embroidery made the hoods to a luxury item and status symbol, its importance in the second half of the 19th century was lost.

Only in the Wachau this tradition, which was widespread in the whole of eastern Austria, was preserved. The collection of the Krahuletz Museum includes many different types of hood, which were originally obtained in the Waldviertel and the Eggenburg area.

One of the showpieces of the Kunstkabinett is the “animal disease picture”.

It was created on the occasion of overcoming a cattle disease by an unknown artist. It is a votive picture, and has two zones as in the usual case: in the upper, dedicated to the events in the sky, the two “saints” St. Wendelin with pilgrim bag and Schäferschaufel (a long-handled shovel for cattle feeding) and St. Leonhard with cattle chain. The lower half of the picture shows the city of Eggenburg, which at that time numbered around 1000 inhabitants (1746), with the late medieval fortification in a view from the south.

Clay model of a workshop in which a potter can be seen at work. He’s sitting at a foot-operated turntable, pulling a pot up. The arch on the front edge of the model shows a cross section of the 18th and 19th century vessels. The piece is probably a publicity stunt of a pottery company from the late 18th or early 19th century.