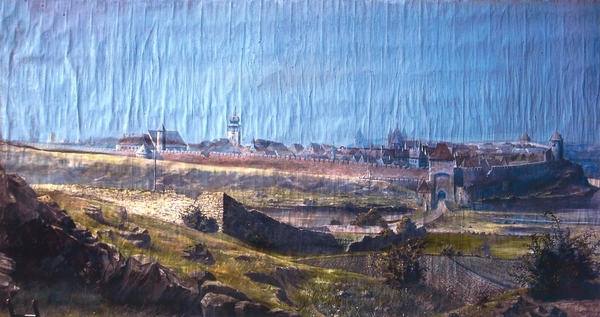 The special exhibition takes visitors on a journey through time and the (Eggenburg) space – artists from Georg Matthäus Vischer to Hans Götzinger show the city from familiar and unknown perspectives. In the center of the exhibition stands the monumental panorama of Adolf Müllner “The Swedes in front of Eggenburg”, which after more than a hundred years has once again been made accessible to the public in the form of a spatial installation.

According to the central installation, the show focuses on Eggenburg views from the late 19th and early 20th centuries. The works of painters such as Götzinger and Müllner, as well as Johann Nepomuk Gellner and Ernst Eck, which were created during this period, were largely based on the initiative of committed citizens of Eggenburg, who wanted to document their city in an appealing way and open it up to tourism. The city planning project “Garden City”, which was realized west of the city on Kühnringer Strasse and can be presented on the basis of some original sketches of Götzinger, also falls into the same period.