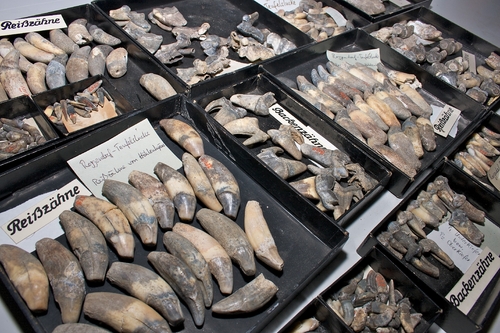 Fossils are fossilized remains of extinct creatures, the oldest pieces in the Krahuletz Museum date back to the Permian age, 300 million years ago, and were found in Kamptal.

Fossil animals such as the Eggenburger Krokodil or the manatee Metaxytherium krahuletzi are among the highlights of our collection and established their worldwide fame.

Make an exciting safari through the history of the earth to manatees, dolphins, cloven-hoofed animals, primeval horses, rhinos, mammoths and many other prehistoric animals.

The oldest fossils in the Krahuletz Museum are remnants of a tropical fern forest from the Permian age, 300 million years ago, and were found near Zöbing in Kamptal.

The Eggenburger Krokodil, the scientific name is Gavialosuchus eggenburgensis, lived about 20 million years ago in the estuaries on the edge of the Eggenburg Sea, similar to today’s Gavialen and fed mainly on fish.

The scientific name of our manatees is “Metaxytherium krahuletzi”, they were named after Johann Krahuletz, who had found the first bones. They lived about 20 million years ago on the coast of the tropical Eggenburg Sea. In the communal sand pit of Kühnring seven almost complete skeletons of manatees were discovered, which had probably jointly found death by a storm surge and a debris avalanche.

The old elephant named “Tetralophodon longirostris” lived about 15 million years ago in the riparian forests along the Urdonau, where he mainly fed on foliage. Despite its similarity to modern elephants, it is only very broadly related to these. The skull of our tetralophodon was found in 1950 during road construction in Hohenwart.